What to Know About Bruising Skin in the Elderly 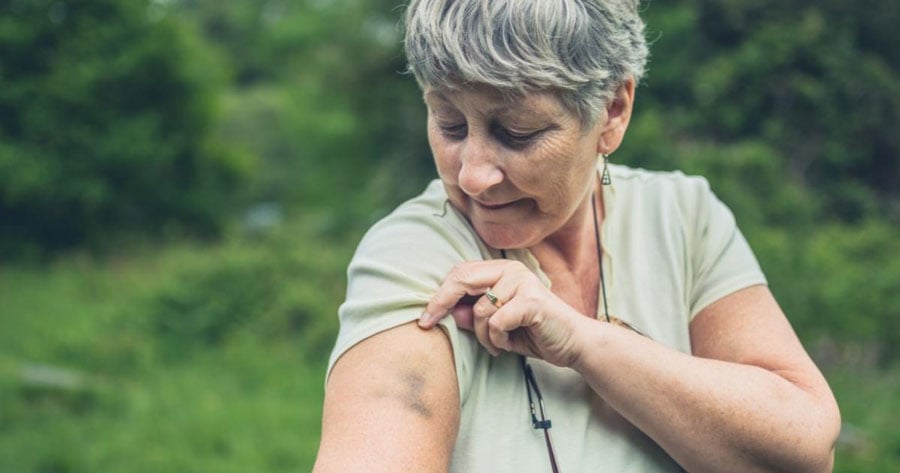 Our skin naturally becomes thinner as we age, making it easier to bruise. Bruising easily or not knowing where bruises originate is common in older adults and is usually not a cause for concern. However, bruises may signify that an older adult needs assistance or could benefit from assisted living. In this blog, we’ll talk about some reasons seniors bruise more easily and when you should be concerned.

What Causes Bruising in Older Adults?

Most bruises form after an injury breaks the small blood vessels, known as capillaries, situated near the skin’s surface. Breaking the capillaries allows the blood to leak into surrounding tissue, creating a black and blue mark. Bruises can be tender and painful but do not pose a health hazard. The body reabsorbs the leaked blood in time, and the bruise disappears. Bruises are common on the arms and legs.

Generally speaking, more brutal blows are more likely to cause significant bruises, although minor bumps can cause bruises in some people. Women are more prone to bruising, as are people on certain medications. Older adults are also more prone to bruising because the skin thins with age and loses some protective fat that helps cushion blood vessels.

Seniors are more likely to take medications that make them prone to bruises. Some medicines, like blood thinners, inhibit blood clot formation to prevent heart attacks and strokes. Many older adults take aspirin to prevent a second heart attack or other cardiovascular problems. Certain dietary supplements, such as ginkgo, can also have a blood-thinning effect. Blood can leak out of capillaries more quickly and longer. Topical and systemic corticosteroids that treat allergies, asthma, and eczema can cause thinning of the skin, which increases the likelihood of bruising.

Older adults may also develop bruises that are not the result of an injury. Sun exposure can cause blood vessels to burst, resulting in large, purple freckle-like spots, known as actinic purpura. These bruises are especially noticeable on aging, translucent skin. Taking steroid medications can worsen the appearance of these bruises. While alarming, actinic purpura is usually not severe.

Several other factors can influence bruising. Vitamin deficiencies, especially vitamin B12, vitamin C, or vitamin K, impact the skin. Some dietary supplements can also increase the risk of bleeding.

When Should I Worry about Bruising in an Older Adult?

While bruises themselves do not pose a serious health problem, the appearance of bruises can sometimes signal that an older adult needs assistance. Easy bruising can signify a health problem that requires medical attention for a blood clotting problem or blood disease. An older adult should see a doctor if they:

Bruising may result from a fall or other accident, which may be avoidable in a safer environment. According to the CDC, one out of four adults ages 65 and older fall each year, but fewer than half tell their doctors. Falling once doubles the risk that someone will fall again.

Older adults fall or injure themselves for a variety of reasons. Sometimes they fall because they are weak due to a new or worsening health condition. At other times, bruise-causing injuries occur because someone slips in the shower or trips over a hazard. Medications can cause dizziness that leads to falls, and failing vision can prevent someone from seeing an obstacle in their path.

While most bruises are harmless, extensive bruises or areas of swelling may cause concern, as they may be a sign of internal bleeding or damage. Older adults with large bruises should see a doctor or go to the emergency room right away. They should consult a doctor for persistent bruising and tenderness, even if the bruise is not large or associated with an internal problem.

Living in a retirement community may help older adults avoid bruises caused by falls, accidents, and other causes. These residential communities take special measures to prevent falls by installing bathroom grab bars and bright lights in walkways. Nursing staff can identify medications that lead to bruises, monitor bruises, and even provide tips on taking good care of the skin, so it does not bruise so easily.

While it is impossible to eliminate bruising in older adults, reducing the risk for bruises is always possible. The more you know about bruising skin in the elderly, the better you may be able to prevent bruises.

10 Foods that Boost Energy and Build Endurance in Seniors

As older adults continue to age, it’s critical that they eat foods with nutrition to boost their...

END_OF_DOCUMENT_TOKEN_TO_BE_REPLACED

How to Enjoy Fall as an Older Adult

As the weather gets colder and the leaves begin to change, it’s time to start celebrating the...

END_OF_DOCUMENT_TOKEN_TO_BE_REPLACED

How to Start Practicing Mindfulness as a Senior

Considering the benefits of mindfulness as you age?