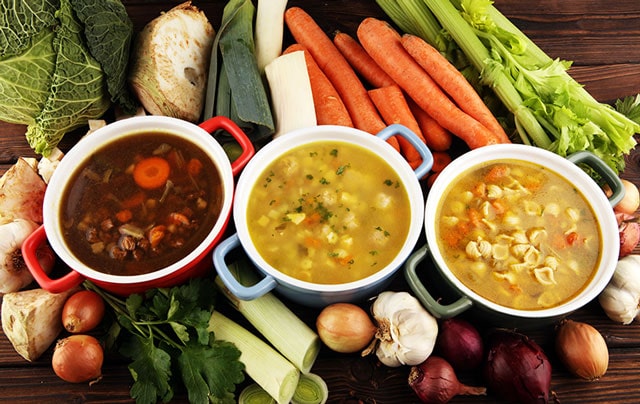 Few things are better on a blustery winter afternoon or evening than a steaming bowl of homemade soup. However, most people associate winter soups with spending hours in the kitchen, and many simply can't spare the time from their busy schedules for marathon cooking sessions.

Fortunately, there are soup recipes that are quick and easy to prepare and only taste like you've made a significant time-and-effort investment.

The key to making this one short and sweet is using shredded rotisserie chicken from your favorite retailer. After frying bacon, add butter leeks, broth, and herbs and allow the mixture to simmer for about 20 minutes before adding chicken and corn. This soup takes 40 minutes to make and serves four-to-six.

2. Vegetarian Chili With Grains and Beans

Although this soup takes slightly over eight hours to cook, your slow cooker does most of the work. All you've got to do is place the tomatoes, wheat germ, and spices in the slow cooker in the morning, set on low, and go about your day. Add the beans and let them cook 10 minutes before serving, and top with sour cream and sprinkles of cilantro, cheddar cheese, and scallions.

This low-calorie but delicious soup takes a grand total of 35 minutes to prepare, but it'll taste as if you've spent much longer. Mix together ground pork, garlic, ginger, green onions, salt, and pepper, form them into meatballs, and broil them until browned. Along with snow peas and cooked rice, add the meatballs to heated broth and simmer until ingredients are tender.

This healthy and hearty cauliflower soup takes approximately an hour and 15 minutes, but only 15 minutes of actual work is involved — the rest of the time, you simply sit back and enjoy the delicious aroma coming from your stove as the soup simmers its way to perfection. After tossing the cauliflower florets with olive oil, salt, pepper, and thyme and baking until golden brown, cook bacon and remove it from the pan. Add onions and cook for five minutes before adding garlic and white wine and reducing the mixture down. Mix it all up together in a Dutch oven with chicken broth and a bay leaf and simmer until the cauliflower is falling apart. Puree until smooth and serve.

Everyone loves beef stew on a wintery day, and you'll love this one even more because it's so easy. This one has just 15 minutes of prep time and simmers on the stove for an hour and 25 minutes. After browning stew meat in a Dutch oven, saute carrots, celery, and onions and make a sauce in a separate pot with broth, wine, thyme, and bay leaves. Mix it all together in the Dutch oven, bring to a boil and then let it simmer until the beef is tender. Add the potatoes during the last 15 minutes, and stir in snow peas and parsley five minutes before serving.

French onion soup is a winter classic that deserves an honored place on every table. Many different recipes exist, and some are even well-guarded secrets among chefs. This one's the easiest, though, and can hold its own against its professionally prepared counterparts. This recipe uses white wine instead of red and mixes chicken stock in with beef stock. The resulting taste is a slightly sweeter twist on the old-school style, but those who try it agree that it's every bit as addictive.

Instant Pots have become the new best friend of busy cooks in recent years, and one taste of this Instant Pot Lentil soup and you'll understand why. All you have to do is add the ingredients, choose the appropriate setting on the Instant Pot, and you'll have hot, delicious, and nutritious soup in a matter of minutes. Lentil soup is extremely versatile, and most people can make it with the ingredients they have on hand, such as lentils, carrots, celery, garlic, onions, and broth. You can add Italian sausage for extra protein or leave it out for a vegetarian experience. To make it vegan, use vegetable broth instead of chicken or beef.

Very few things are more satisfying than corn chowder on a cold winter day — unless it's corn chowder with bacon. Like many good soups, it all starts with a Dutch oven. All you need to do is brown the bacon in the Dutch oven before adding potatoes and onions and continuing to cook until the onions are translucent. Add creamed corn, seasonings, and simmer until 15 minutes. Ham, clams, chicken, or even steak bits can be used instead of bacon for a change of pace.

Treat yourself to a much-needed taste of summer by whipping up this garbanzo bean and sun-dried tomato soup in slightly more than half an hour in your home kitchen. Use pasta shells, garbanzo beans, chopped celery and carrots, onion, garlic, and water or your choice of broth. Season with fresh thyme, rosemary, and bay leaf and add red pepper flakes, salt, and black pepper to taste.

Because soups are among the easiest recipes to customize according to individual needs and preferences, you'll undoubtedly develop your own special twists and turns when crafting the delicious recipes listed above, so feel free to experiment and make each one your own.

5 Tips for Staying Active in the Winter for Seniors

END_OF_DOCUMENT_TOKEN_TO_BE_REPLACED

Osteoarthritis pain can prevent you from doing the things you love. This common form of arthritis...

END_OF_DOCUMENT_TOKEN_TO_BE_REPLACED

Staying Hydrated in the Summer Heat: 7 Tips for Seniors

As the outdoor temps are warming up, that means it’s a great time to be outside. Whether you’re...