Understanding How Dementia Is Diagnosed 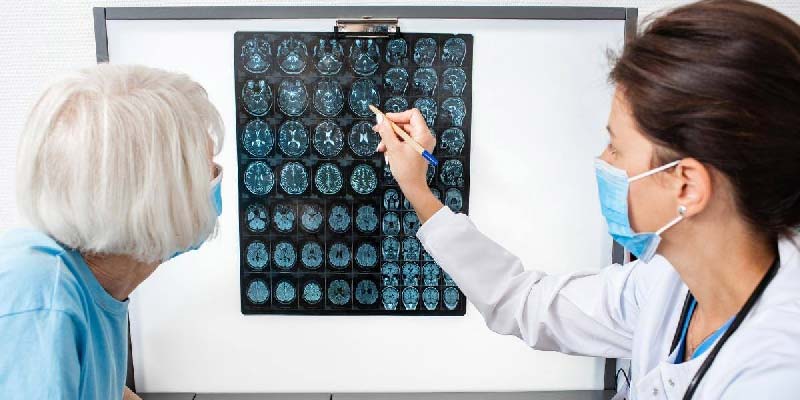 If you or someone you love is experiencing symptoms of dementia, you may wonder how doctors diagnose the condition.

Dementia is a group of diseases that can be difficult to diagnose, especially in the early stages when symptoms are mild. Symptoms of early dementia include memory loss, poor judgment, confusion, difficulty communicating, wandering, and getting lost in a familiar neighborhood. People with dementia often have trouble handling money or paying bills.

Dementia is a neurodegenerative disease, which means signs and symptoms develop when once-healthy nerve cells in the brain stop working, lose connection with other cells, and die.

No single test can definitively diagnose dementia, so doctors usually run several tests to determine if the patient’s symptoms result from dementia or another condition.

Blood tests can help doctors detect physical problems, such as an underactive thyroid gland or vitamin B-12 deficiency, which affect brain function in ways similar to dementia. In some cases, doctors may examine spinal fluid for infection, inflammation, or markers of degenerative diseases.

Brain scans create images of the brain and some of the features of the brain. They are often the last tests doctors perform when diagnosing dementia. Doctors typically order brain scans when other tests have ruled out other causes.

CT and MRI scans can show evidence of stroke, bleeding, a tumor, or fluid build-up in the brain (hydrocephalus). CT scans are a series of X-rays compiled by a computer to create 3D images of the brain. MRI scans use powerful magnetic fields and radio waves to create images.

MRI scans can help doctors confirm a diagnosis of dementia, confirm the type of dementia a patient has, and provide a detailed assessment of blood vessel damage in cases of vascular dementia. These scans can also show changes in the brain, such as shrinkage from frontotemporal dementia or Alzheimer’s disease.

PET scans can display activity patterns in the brain that might suggest dementia. It can help identify several forms of dementia, including frontotemporal dementia and vascular dementia. PET scan images can also detect amyloid and tau protein deposits, which are specific hallmarks of Alzheimer’s disease.

Why an Early, Accurate Dementia Diagnosis Is Important

While there is currently no cure for dementia, an accurate diagnosis is vital to rule out other conditions that may be curable.

An early diagnosis creates an opportunity for future care and treatment. A diagnosis provides access to treatments that may remove amyloid, an abnormally fibrous deposit found in the brains of people with some types of dementia, for example. Other treatments can help reduce symptoms, such as memory loss or confusion, for a short time. Starting these treatments early gives patients a better chance of benefiting from treatment.

A diagnosis of dementia can also create an opportunity to participate in clinical trials. Participation can help medical researchers better understand dementia and may help doctors find a cure someday. Participating in research may provide medical benefits to the patient.

Getting a diagnosis allows patients to make lifestyle changes that may help preserve cognitive function. Lifestyle changes include controlling blood pressure, stopping smoking, participating in regular exercise, and staying socially active and mentally fit. An early diagnosis can also give family members time to learn how to communicate with their loved one as the disease progresses.

A definitive diagnosis also helps people plan ahead while they are still able to make important decisions about their care, support needs, financial arrangements, and legal issues.

For more information on how dementia is diagnosed, consult with your doctor. An early diagnosis can help you or your loved one get the treatment they need.

The Stages of Dementia & Care Associated with Each Stage

If you or a loved one has recently received a dementia diagnosis, you may be feeling alone or...

END_OF_DOCUMENT_TOKEN_TO_BE_REPLACED

What to Avoid When Talking to Loved Ones With Dementia

When a loved one experiences dementia, communication can be challenging. As you never want to cause...

END_OF_DOCUMENT_TOKEN_TO_BE_REPLACED

Both dementia and Alzheimer's disease are serious conditions that affect seniors and older adults....