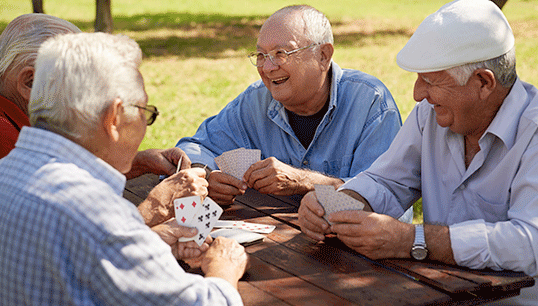 Looking for something fun to do this summer? How about a game party to bring back the kid in you? Consider a February 1962 Twilight Zone episode called Kick the Can.

Set in a retirement home, the story centered around a group of folks who lived at Sunnyvale Rest Home. They spent a lot of time lamenting the loss of their youth, until Mr. Bloom moved in. Mr. Bloom (charmingly played by Scatman Crothers) admonished the group that feeling young and active was all about  attitude, not age. He promised to wake them later that night to prove it with a game of kick-the-can. Finally, he convinced everyone to agree – save one Leo Conroy, who dubbed the idea ridiculous.

That night, as Mr. Bloom and his new friends played the game under the stars, they were transformed into their childhood selves. In case you haven’t seen the episode – which was later featured in the 1983 Steven Spielberg Twilight Zone: The Movie, we won’t ruin the ending for you! Rent the Spielberg version on DVD and enjoy the tale (perhaps a movie night is also in the works!).

If you agree with (or want to test) Mr. Bloom’s contention that feeling young is mostly about attitude, start choosing your games! Even if you’re not a fan of kick-the-can, a Scrabble game, poker or euchre tourney or meet-up at the nearest miniature golf course can be a blast for everyone. Game day/night is more about laughs and socializing than “real” skill or competition.

If you want to make it a “retro” game event, ask people to recall their favorite games from childhood. Caroms, Buck Buck, Stoop Ball, Hula Hoop, yo-yos or croquet, anyone? Whatever you choose, we guarantee nobody will regret being reunited with his or her inner kid. Olly-olly-oxen-free!

3 Fall Fun Ideas for Seniors and Their Families

As the leaves begin to change color, and the cooler temperatures start to stick, it’s time to say...

END_OF_DOCUMENT_TOKEN_TO_BE_REPLACED

5 Tips for Brightening Up a Small Space

Moving into a senior living community can be an exciting but difficult time. We are leaving one...

END_OF_DOCUMENT_TOKEN_TO_BE_REPLACED

How Safe Are Assisted Living Communities During COVID?

Many of our lives have been dramatically changed due to the COVID-19 epidemic. We’ve all had to...